Join us as we celebrate the 2023 inductees to the Alpha Omega Alpha medical honor society. Each year, the inductees are celebrated at an invitation-only banquet, held this year on Tuesday, April 4 at the Pyle Center, located at 702 Langdon St. in Madison.

This is an accordion element with a series of buttons that open and close related content panels.

A social hour will begin at 6:30 p.m., and dinner will be served at 7 p.m.  The induction ceremony for the Class of 2023 will take place following dinner.

Information about parking will be available soon.

Students have received a special registration link via email that provides a free, complimentary dinner. If you are a student inductee and did not receive this link, reach out to smphevents@med.wisc.edu.

All invitees and their guests are encouraged to honor these outstanding students by attending this celebration.

You’ll have the option to add guests, make your meal selection, specify your name as it will appear on your name tag, and make a donation as you go through the registration process.

In addition, we are asking faculty AOA members, AOA alumni, and house mentors to consider underwriting the cost of one or two student members for the banquet by contributing an extra $25 or $50. This has been a long and worthy tradition at Wisconsin; one we think deserves to be continued. If you are personally unable to attend the banquet, please consider sponsoring a student via a donation to AOA.

More information on how to make a donation will be available soon.

Herbert Chen, MD, is the 2023 AOA Dr. David de Harter and Diane de Harter Visiting Professor. He is the chair of the Department of Surgery at University of Alabama at Birmingham and a professor of surgery, pediatrics, and biomedical engineering. He will address the 2023 inductees at the banquet and also give a public talk.

On Wednesday, April 5 in the morning Dr. Chen will give a talk as part of the Department of Surgery Grand Rounds. All are invited to attend this event.

More information about this talk will be available soon.

Founded in 1902, today Alpha Omega Alpha (AOA) has 132 chapters. As the only national honor medical society, its mission has been to recognize and enhance professionalism, academic excellence, service, and leadership within the profession of medicine. 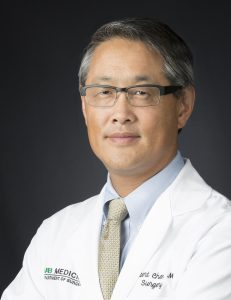 Herbert Chen, MD, is the 2023 AOA Dr. David de Harter and Diane de Harter Visiting Professor. The title of his talk to the inductees will be “Making Time.” He is the chair of the Department of Surgery at University of Alabama at Birmingham and a professor of surgery, pediatrics, and biomedical engineering.

Dr. Herbert Chen obtained his bachelor’s degree from Stanford University with honors and with distinction in 1988 and graduated from Duke University School of Medicine Alpha Omega Alpha in 1992. Dr. Chen then completed a general surgery residency followed by a surgical oncology and endocrinology fellowship at The Johns Hopkins Hospital.

Dr. Chen is Chair of the Department of Surgery at University of Alabama at Birmingham (UAB), and the Surgeon-in-Chief of UAB Hospital and Health System. He holds the Fay Fletcher Kerner Endowed Chair. His clinical interests include endocrine surgery and he is a pioneer in radioguided parathyroid surgery.  Dr. Chen is the Editor-in-Chief of the American Journal of Surgery. He has held several leadership positions in numerous major academic societies. Dr. Chen has mentored over 130 faculty, post-doctoral fellows, residents, medical students, and undergraduates in his lab. He has published over 620 original research and review articles and has edited 28 textbooks. He is well-known for his passion for teaching and mentoring the next generation of surgical leaders. Dr. Chen has also been recognized as a champion for diversity, equity, and inclusion.

Dr. Chen and his wife Harriet, a freelance photographer, reside in Mountain Brook, AL. His son Alex is medical student at Yale University while his daughter Liz is a graduate student in Graphic Design at NC State.

DJ de Harter, MD, is a retired radiation oncologist and medical director who grew up in Wisconsin and earned his medical degree from the University of Wisconsin School of Medicine and Public Health in 1968.

As a member of the Alpha Omega Alpha (AOA) Honor Medical Society and a philanthropist, Dr. de Harter — along with his late wife Diane — decided to create the David J. and Diane L. de Harter/Alpha Omega Alpha Visiting Professorship at his alma mater.

They hope their gift will encourage other physicians and families to consider what they might do through activism or targeted giving to help the profession of medicine.

Questions about this event? Contact SMPH Signature Events at smphevents@med.wisc.edu.

Accessibility statement:
The University of Wisconsin School of Medicine and Public Health is committed to accessibility. If you need an accommodation to attend or participate in this event, please contact the SMPH signature events team at smphevents@med.wisc.edu. We ask that accommodation requests be made no less than two weeks before an event. We will make a thorough attempt to fulfill requests made after this date but cannot guarantee they will be met.